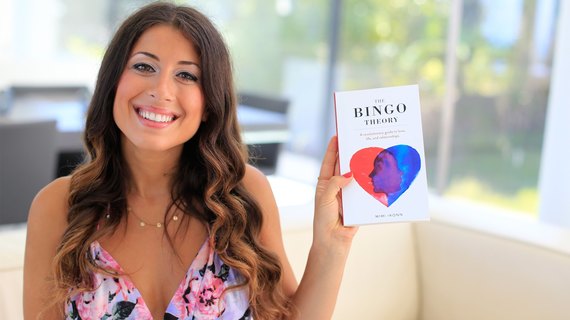 Mimi Ikonn (photo), co-founder of Intelligent Change, and author of the new book The Bingo Theory, talks about a better definition of masculine and feminine. At the end or her piece, Mimi has a quiz to determine your dominant energy and how you can bring it into balance or what she calls a Bingo (based on the newsletter of Five Minute Journal).

Do you find it hard to sit still and relax? Do you feel lazy and guilty if you aren’t constantly working through a to-do list?

Or perhaps your issues are just the opposite.

Is inaction your problem? You love options but can’t decide? Do you find it hard to stand up for yourself? Do you constantly doubt yourself?

But are these stereotypes actually true?

You might be or know women who are more masculine and men who are more feminine. However, this is still not fully accepted in our society and is often looked down upon. Many men feel ashamed for being called a feminine man and women being called masculine. This outdated and inadequate mindset has lead to a tremendous imbalance, both internally in our lives, as well as externally in our world.

Many of us do not embrace the natural strengths that we possess for fear of not being accepted.

A better definition of Masculine and Feminine

The idea of all men being masculine and women being feminine is broken.

However, being a feminine man or a masculine woman is not a weakness, it’s a strength. Time has come that we learn how to nurture these strengths in ourselves and see them in others.

All of us actually have both of these energies within us.

For years it was believed that men and women’s brains are wired differently – the famous ‘Men are from Mars, Women are from Venus’ idea – but now a growing body of research shows that neurologically we are all a mixture of both masculine and feminine traits.

Professor Simon Baron-Cohen, a psychologist at Cambridge University, believes that we are all on a spectrum between Empathizers or Systemizers:

So far as men are concerned, Baron-Cohen found that 53 percent of men have systemizing brains, 17 percent have empathizing brains, and 24 percent are roughly balanced. The remaining 6 percent have an extreme male brain.

A unique mosaic of masculine and feminine

A new way of thinking suggests that hormonal differences play a very small part in why we are the way we are. A research conducted on 2015 by Daphna Joel, a professor of neuroscience at Tel Aviv University, has found that we are all a mosaic of masculine and feminine features. Joel analyzed the brain scans of more than 1400 men and women and failed to find consistent differences between the sexes. Instead she found that we are all a unique mixture of male and female features. Her study discovered that between zero and eight percent of people had all male or all female brains. The vast majority of people were somewhere in the middle, showing that gender isn’t binary – we are all a blend.

What is your dominant strength energy?

Is it masculine or feminine? Here’s a quiz proposed by author that will help you find out: the “Bingo Theory quiz” (external link)

So what does that mean exactly?

As the author has mentioned above, we all have both masculine and feminine energies inside of us. Based on nature and nurture, one of these energies is usually our dominant energy.

In order to live a happy and balanced life internally, as well as externally, I believe we must bring both of these energies into balance. I call that winning combination of Masculine and Feminine Energy a “Bingo”.

It’s only then that we are able to have healthy, loving relationships with ourselves and others. This includes both personal and business relationships and affects every area of our lives from love and romance to career and physical health.

I write this post some days after knowing that Aaron Swartz, the genius behind RSS, Creative Commons and co-founder of Reddit, decided […]

Movable Type has changed its price’s politic and added several license types. This is very interesting (thanks to Loic Le Meur): And […]

Image via CrunchBase This post started as a simple test entry to understand what’s wrong with Movable Type release 5. I use […]