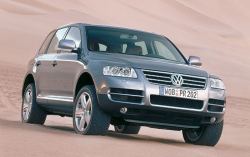 The Italian government is planning to introduce a new tax on big polluting cars such as sports utility vehicles (SUVs), a move which could benefit Turin-based Fiat but incur the wrath of other European countries.
Environment Minister Matteoli said taxes on the gas-guzzlers could be used to fund incentives for people to scrap old cars and buy more environmentally friendly ones.
Italian streets have traditionally swarmed with small runarounds, often Fiats, but in the last year SUVs such as the Porsche Cayenne and BMW X5 have taken off in popularity, often jamming narrow city roads.
“Taxing SUVs would not only be a tax on pollution but also on causing traffic jams,” Environment Minister Altero Matteoli said in an interview with Friday’s Corriere della Sera paper.
Petrol-hungry SUVs are pretty much the norm in the United States but have raised ire around Europe where environmentalists decry their emission levels and mayors moan that they are a hazard to pedestrians, cyclists and smaller cars.
Earlier this year, France proposed raising taxes on them but put the plan on hold when Germany argued the move protected French companies that make smaller cars, as does Fiat.
Matteoli said Italy’s Environment Ministry was working on a way of calculating road taxes depending on a car’s pollution level — the size of its engine, its registration year and the sort of fuel it uses.
That would again benefit Fiat, whose fuel-efficient Multijet diesel engine is one of Italy’s best sellers.
Matteoli said he could reintroduce incentives for people to scrap old cars which spew out more pollution than new ones.
“It isn’t fair to put a higher road tax on older cars that often belong to poorer people. (So we could) provide incentives for people wanting to change those cars, possibly using the money we get from taxing polluting cars,” he said.